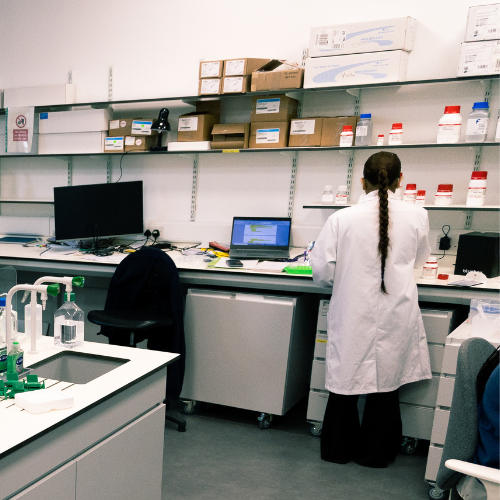 Nanovery, a cutting-edge biotech company developing nanorobots that will be used to diagnose deadly diseases at an early stage, worked with Newcastle University’s Centre for Cancer to identify its first commercial target for their device and validate their prototype. They were able to access the Centre’s researchers through Newcastle University’s Arrow programme which matches North East SMEs with the knowledge and expertise to help them innovate.

Nanovery's technology has the potential to dramatically reduce the cost and turnaround time of a liquid biopsy, making it more accessible to patients and healthcare providers. It can be used to detect a wide range of diseases, and they are developing tests for prostate cancer, and liver disease.

Nanovery’s nanorobot is a tiny functional device built using nanotechnologies which can capture disease-related DNA or RNA, producing a visible signal to indicate a positive result.

The feasibility project was to see if the nanorobots could detect clinically relevant mutations found in cancer cells that were grown in a laboratory. Key outputs included a report of proof-of-concept data and protocols that would aid operational planning.

The biotech company needed someone who had the expertise to test its prototype design. Arrow facilitated a collaboration between Nanovery, Dr Luke Gaughan at the Centre for Cancer and Dr Rakesh Heer, a consultant urologist. A proof of concept study was constructed with help from both researchers, who made sure that it had an excellent clinical and biological grounding.

Following this successful project, Nanovery continued to collaborate with the Centre for Cancer through an IIIP studentship which allowed them to host a funded PhD student. They also plan to submit joint grant applications in the future.

“Working with Newcastle University helped us identify gaps in our team and has allowed us to employ more staff, and fund PhD students. We have also cemented our relationship with the University’s Centre for Cancer.”

Working with Arrow was a vital stage in Nanovery's innovation journey. It allowed the company to identify a first commercial target for their device. It also provided access to expertise on how to test and validate their prototype in a lab with clinically relevant cell lines. The team gained insight into the type of data they needed to validate their technology.

This project enabled Nanovery to secure Innovate UK grant funding and £0.5 million seed investment. It also allowed the company to set up operations in the Biosphere at Newcastle Helix, where they have just moved into a larger office space, to accommodate their growing team.

The company now employs a team of five technologists and hosts two PhD students from Newcastle University to develop their diagnostic test. Nanovery plans to secure two commercial pilot projects within the next year, as well as further grant funding in collaboration with Newcastle University.

Arrow provides business support for small and medium-sized enterprises that need help to innovate and grow, as well as early-stage businesses in the start-up phase. It has helped over 150 regional businesses, including many in the Bio-tech sector with support that includes:

Find out how Arrow could help your business, and get in touch arrow.admin@ncl.ac.uk.