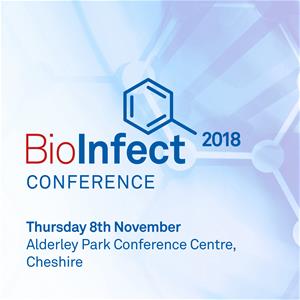 Health experts, academics and business leaders tackling the global threat of drug-resistant bacteria are gathering for the BioInfect Conference on November 8.

The one day event, held at Alderley Park in Cheshire, features a keynote from Rich Lawson of CARB-X, a key US-led organisation which is investing more than $500 million around the world to address the problem of our dwindling supply of effective antibiotics. Bioinfect 2018 also features an address from Werner Lanthaler, CEO of Evotec, a business which has developed into one of the European leaders in biotechnology over the last 20 years.

The conference also includes contributions from Colm Leonard, Consultant Clinical Advisor at the National Institute for Health and Care Excellence (NICE) and Todd Black, Executive Director Infectious Diseases at Merck. Dr Peter Jackson, executive director of The AMR Centre, which is at the forefront of the UK’s efforts to accelerate the development of new antibiotics and diagnostics is amongst the other speakers.

Antimicrobial resistance (AMR) has emerged as a priority in global public health in recent years. The threat stems from bacteria, viruses, parasites, and fungi that naturally develop resistance against medicines that were previously able to cure them. At the same time, the failure of the drug development pipeline in this area and the overuse of the antibiotics we have has created a crisis. At present AMR claims around 700,000 lives a year but that figure is forecast to multiply. By 2050, if left unchecked, drug-resistant infections will kill 10 million people a year and cost the worldwide economy $100 trillion.

Dr Geoff Davison, chief executive of Bionow, said: “It’s well understood that the notion of the world returning to a pre-antibiotic era has disastrous implications and threatens to reverse decades of advances in medicine. Limited progress has been made since an historic United Nations declaration in 2016, in which all countries pledged to address the issue. National action plans have been developed and advances across biology, technology, engineering and data science are converging to help create new solutions to the problem.

“But we are still in a race against superbugs. Bioinfect 2018 has a focus on the challenge of getting the drug development pipeline working effectively, including the so called ‘Pull’ and ‘Push’ initiatives. These include some radical proposals which may go before the US Congress next year. The conference will also explore funding opportunities, the role of big pharma in an era where many have exited anti-infectives and how companies like Evotec are bucking the trend and taking a leadership role in the area.”

Bionow has just led a wide-ranging AMR industry group in making representations to the House of Commons Health and Social Care Committee. It has investigated progress on tackling the AMR issue and is calling on the Government to make AMR a ‘top five policy priority’ in order to help prevent the virtual loss of worldwide modern medicine.

The Select Committee, chaired by Dr Sarah Wollaston, made a series of recommendations around investment in new drug development, prescribing habits and better use of digital health tools. Given the UK’s pending exit from the European Union, it also wants any future trade deals to require that meat and dairy produce imported into the UK meet at least the same standards relating to antibiotic use which apply to products produced in the EU.

Dr Peter Jackson, executive director of the AMR Centre, who is speaking at Bioinfect 2018: “AMR is a complex challenge in human and animal health and for a variety of reasons big pharma has passed the baton to small and medium sized companies in terms of creating new drugs for bad bugs. There is a lot of really exciting science out there and events like Bioinfect are a chance to share and reflect upon the innovation taking place. They give you a sense of how formidable challenges can be overcome.”

Dr Chris Doherty, managing director of Alderley Park, commented: “The UK needs to stay at the forefront of dealing with the AMR crisis which is why we are only too pleased to support Bionow and Bioinfect 2018, which brings together leaders in the field. To date, Dame Sally Davies, the Chief Medical Officer for England, and Lord Jim O’Neill, who led an AMR Review commissioned by the UK Government, have been able to get this issue on the very top table at the UN and with the G20, setting global agenda. Where there is a will there will be a way and it’s encouraging to see so many leaders in AMR sharing insights at Alderley Park.”

BioInfect 2018 is supported by Perfectus Biomed, Evotec, The AMR Centre and Alderley Park.